Procession at the festival.

Paris: On a beautiful sunny Saturday morning, the 21st edition of the Festival of Tibet and the Himalayas was inaugurated in the green setting of the Bois de Vincennes located in the 12e district of Paris. The Maison du Tibet, under the direct supervision of the Bureau du Tibet, has organized a two-day festival from September 3 to 4 each year in Paris. Over the years it has become a major cultural event. Each year a different theme is carefully chosen for the Festival and this year’s theme was “Water from the roof of the world: the rivers that unite us”.

The official ceremony began with the procession of the portrait of His Holiness the Dalai Lama, which was installed on the throne of the main stage.

Ms. Emanuelle Pierre Marie, Mayor of 12edistrict of Paris and the representative Rigzin Genkhang inaugurated the festival in the middle of the chanting of the prayers of invocation and the Sangsol to purify the place. Ms. Geneviève Garrigos, municipal councilor at the town hall of Paris then joined in the festivities.

In her opening speech, Representative Genkhang remembered and paid tribute to Ms. Yuthok, the first female representative of His Holiness the Dalai Lama in Paris during whose tenure the Tibet and Himalayas Festival was established in 2000 not to mention the valuable work of his later male predecessors. .

She also underlined the important role of the Tibetan community for its contribution to the French economy and for the harmonious and peaceful coexistence with the French people.

More than 20 stands run by individual companies, various associations, Buddhist centers and artists welcome the public. The majority of stalls sell a mix of Tibetan and Himalayan artifacts, but also spices. Background music, dance performances on stage create a festive atmosphere. The restaurants mainly offer Tibetan cuisine, including momos and butter tea, but also Himalayan cuisine that teases the taste buds of the public and takes them on a culinary journey without leaving the French capital.

Various discussions took place on different subjects, such as “The current situation in Tibet”, in which Representative Genkhang and Mr. Pierre Antoine Donnet, academic, journalist and former editor-in-chief of AFP took part. Seizing the opportunity, the latter also presented his forthcoming book entitled “Chinese Files”, which he wrote with other authors. Simultaneously, exhibitions and film screenings on Tibet were taking place in the pagoda and tents.

The Saturday night concert saw performances by French artists from The Voice and Eurovision and Tibetan artists including Thupten Tsering from Arunachal Pradesh, Namgyal Lhamo, Lobsang Delek, Tenzin Gyalpo (Michael), Phula, DJ Kunga and others. Over three thousand people sang and danced to the music until the wee hours of Sunday.

The Festival concluded on Sunday evening with the dismantling and scattering of the Sand Mandala prepared for the Festival in the nearby lake and the traditional circle dance with the participation of the public.

Thupten Tsering, Secretary of the Tibet Office and Jigme Dorji led the Festival, while Tenzin Norden was deployed from the Tibet Office in Brussels to assist them. However, the Festival is made possible in large part thanks to the contribution of the volunteers who have helped to make the organization possible. At the closing ceremony, Representative Genkhang and her team expressed their gratitude for the hard work they do every year by presenting them with a traditional headscarf.

More than 5000 Parisians, Europeans and others gathered and discovered the cultural richness of Tibet and the Himalayas.

-Report submitted by the OOT, Brussels. 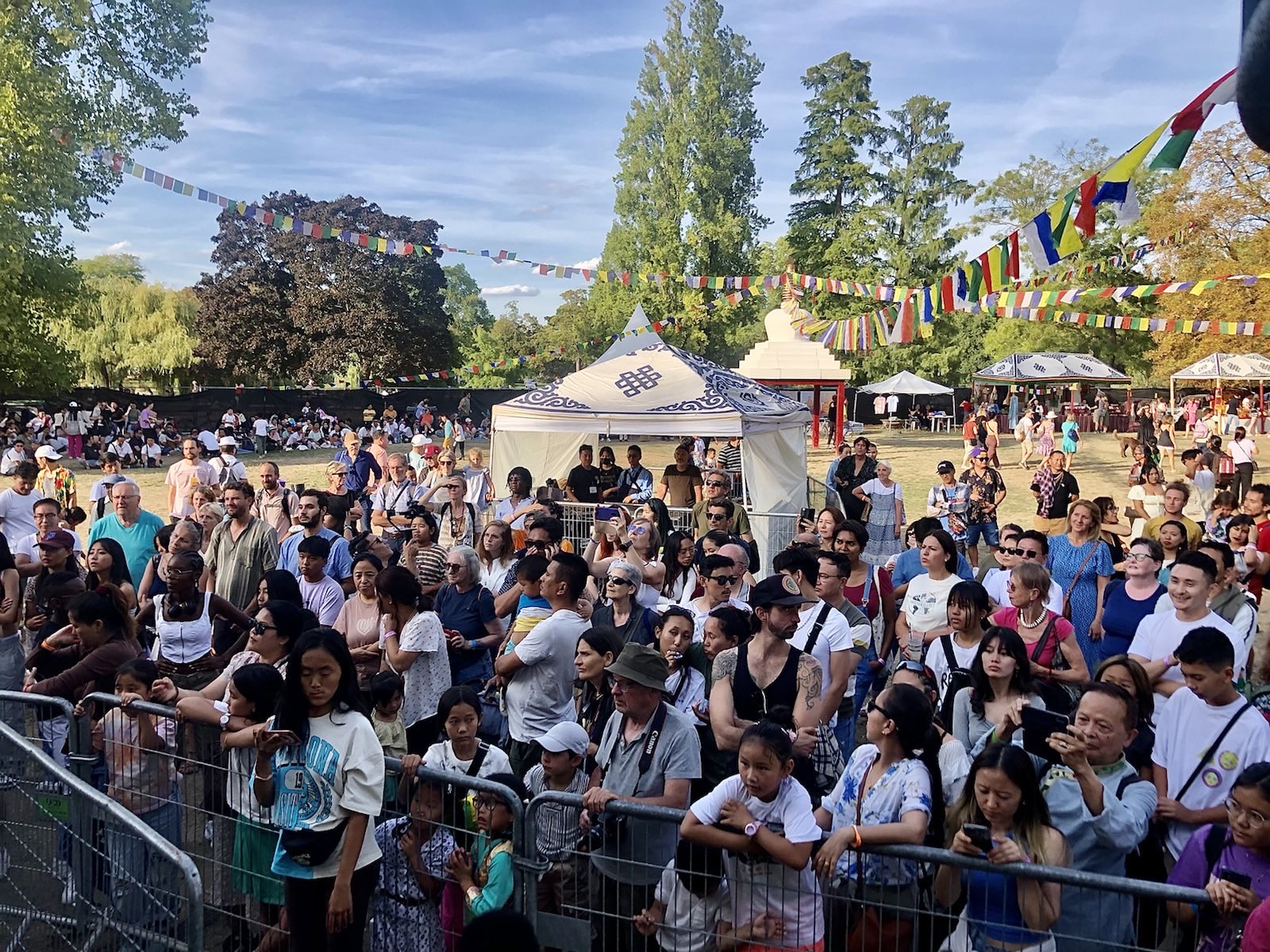 Convergence of the public at the event. 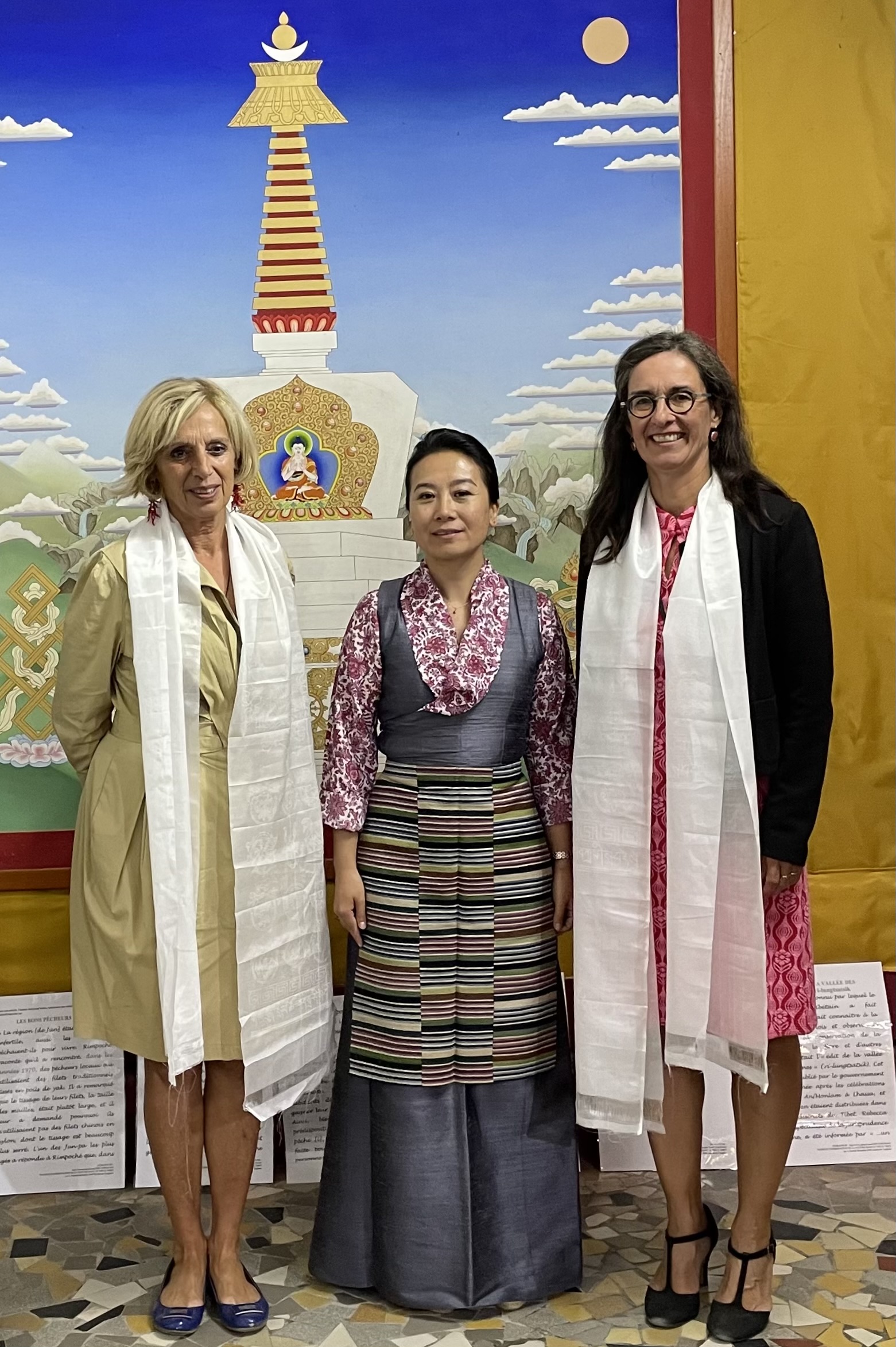 Depicting Genkhang with Ms. Garrigos on her right and Ms. Pierre Marie on her left. 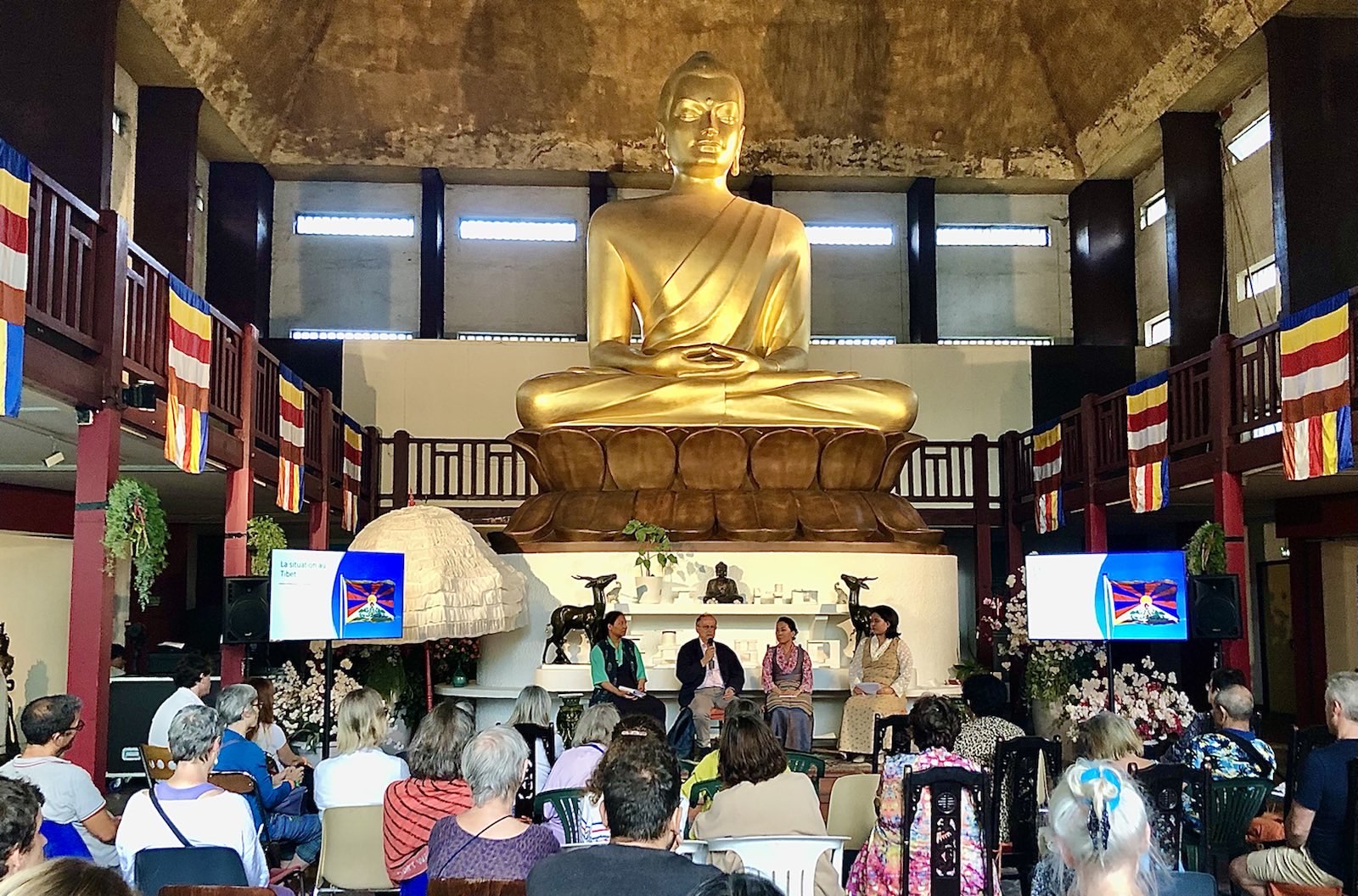 Discussion on the situation in Tibet.